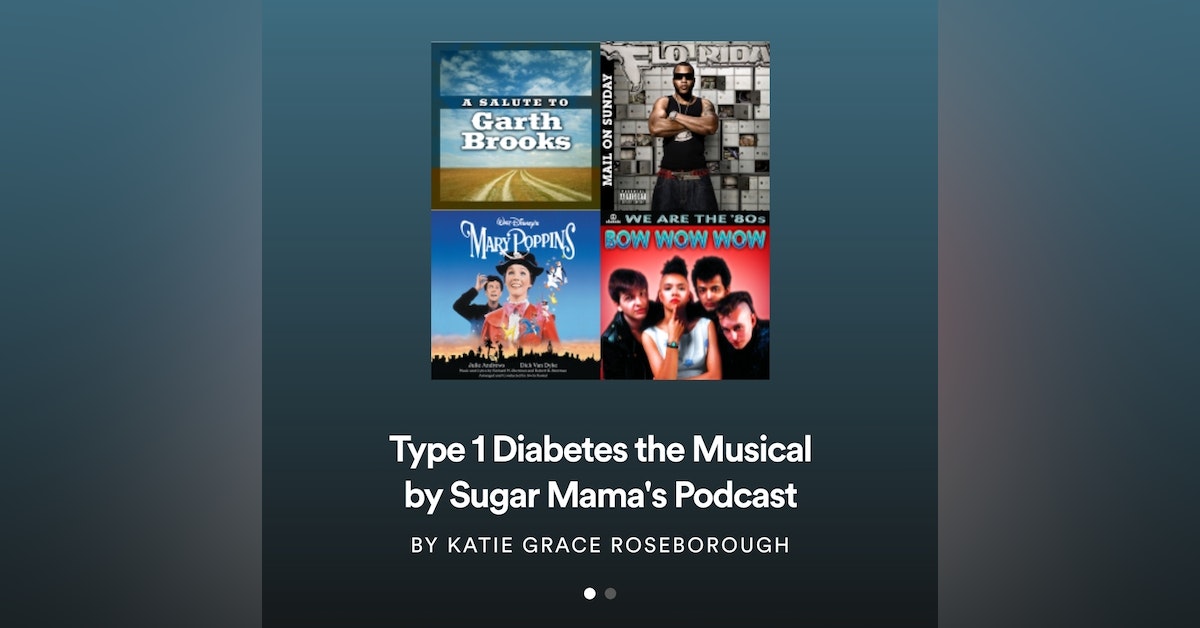 I am, and have always been, one of those people who goes around singing songs that match whatever circumstance I find myself in. Sometimes the lyrics are already perfect for the situation at hand and sometimes I change them a little bit to make a parody. When my daughter was diagnosed with type 1 diabetes, naturally this "habit" of mine came right alongside me as we bolused for meals, changed devices, and dealt with the highs and lows that are just inevitable with being insulin dependent. Thus, Type 1 Diabetes THE MUSICAL was born and today I want to share it with you, listeners of The Sugar Mama's Podcast!

In this episode, I sing my way (yes, you get to hear me sing) through each and every one of these songs. Type 1 Diabetes the Musical has 9 categories or scenes that I organized the nearly 40 songs into. Below you will find a written list of these categories and songs as well as a link to the Spotify Playlist where you can listen to all of these songs in ordered or shuffled. Enjoy!

Find the Playlist on Spotify by clicking HERE!

Product of the week: Fitbit Versa 2 (Amazon Affiliate Link)
*This is the watch both Sarah and I use with the GLANCE watch face to see her Dexcom numbers. It's waterproof which is a huge bonus!

More about the GLANCE watch face

Support the Show at Buy Me a Coffee

I got Friends in Low Places by Garth Brooks

Low by Flo Rida and T-pain

Just a Spoonful of Sugar from Mary Poppins

Pour Some Sugar on Me by Def Leppard

Sugar Sugar by the Archies

How Low by Ludacris

Sugar, We’re going Down by Fall out Boy

Because I got High by Afroman

She’s so High by Tal Bachman

Up Down by Morgan Wallen

FOR WHEN YOU ARE JUST FED UP

Take this Job and Shove it by Johnny Paycheck

They Don’t Know by Ariana Grande

My Lovin’ (You’re Never Gonna Get it) by En Vouge

FOR ALL THOSE ON AN INSULIN PUMP

Pump up the Jam by Technotronic

Pump It by the Black Eyed Peas

Push It by Salt-N-Pepa

FOR THOSE ON MDI

Not throwing away my shot from Hamilton

Hit me with Your Best Shot by Pat Benatar

FOR WHEN YOU ARE FEELING VICTORIOUS

I gotta feeling by the Black Eyed Peas

We are the Champions by Queen

Remember This by the Jonas Brothers

FOR WHEN YOU SAVE YOUR CHILDS LIFE AT NIGHT

Someone saved my Life tonight by Elton John

Email has been submitted.